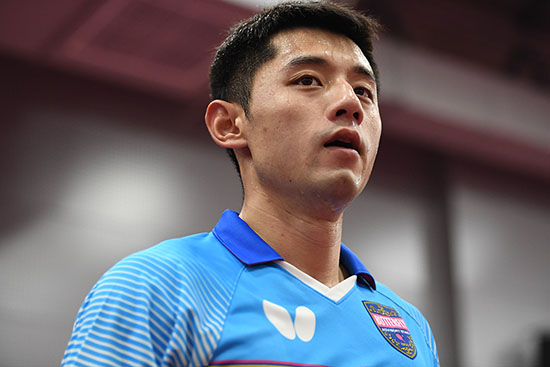 He is back! Interview with Zhang Jike: “I still have a chance.”

He is back! Interview with Zhang Jike: “I still have a chance.”

At the All China Games held in September 2017, Zhang Jike, playing in front of massive numbers of enthusiastic female fans who filled with the tiered seating, was beaten by Zhou Kai at quarter-final stage of the Men’s Singles event. Head down without even wiping the dripping sweat from his chin, he left the arena. It is true that his condition was far from the best but I have to say that I felt something more than “just a defeat”. He could not overcome his adversary even in his favourite strokes, the backhand topspin against backhand and a step around to execute a powerful forehand attack from the backhand side was not seen very often.

He did not appear in the international scene after the World Tour German Open in November last year. Quite a few predicted the former World Champion, who had lost against Tiago Apolonia in the first round in Germany and was seemingly suspect against foreign players, would soon retire.

However, this year, in February after Chinese New Year, a message was received by the person in charge at Butterfly.

“Will you please come over to adjust my equipment as I want to restart practice?”

The message was from Zhang Jike for whom there had been a hectic time promoting table tennis. Public performances, guest appearances all meant that for three months he had not practiced.

Therefore, the following month, members of the Butterfly staff visited the national training centre in Beijing; they watched as he shed sweat following his return to training for two weeks. They did not sense his hesitation or anxiety at all.

“At the moment I want to keep playing as long as possible. I want to participate at the Olympics in Tokyo.” Zhang Jike answered when he was asked about his future goals.

“There is still a big gap between the Chinese young players and Ma Long, Fan Zhendong and Xu Xin. They are not competent enough to be relied on as Chinese representatives. I think I still have a chance in both experience and ability,” added Zhang Jike.

He is not the kind of person who makes such comments without great thought. In addition, it was apparent from his enthusiastic gaze that he did not just mean by “chance” to return to be the national team. He, of course, meant “there was a chance to return to the world’s pinnacle.” It seems behind the words underline the expectation of his fellow teammates; they can overcome him, he is the Great Wall, they will be even stronger. There was a certain confidence, too, in the former World Champion.

Equipment is one of the facts on which Zhang Jike places great importance. He needs time to adjust himself after the break and to adjust in particular to the change of ball material.

“I think each player has a different request towards his equipment because the playing style and the playing quality differ from player to player. I place emphasis on spin and speed. The most important thing for me is spin from blade and rubber.”

“It is some dozen years since I started using this racket, so I have the pride to know everything about its performance. This racket has the Arylate-Carbon inside, so it can deliver a quality ball with enough spin and speed,” Zhang Jike commented.

Butterfly has always made every effort to respond and that will never change.

Zhang Jike is back on the international scene, the huge target is to participate in the Olympic Games for the third time; he knows the capabilities of his racket.

It is not impossible, of course, because Ma Long and Xu Xin are of the same generation and are still active in the front line of world table tennis, but the path will not be easy.

However, surprisingly, isn’t it easy to imagine a man walking a rocky path with a cool face?

Starting with the Hong Kong Open which began on May 22nd, he has entered two international events for the first time in about half a year, China and Japan Opens. The curtain for his second chapter has been raised. 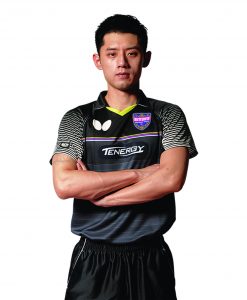