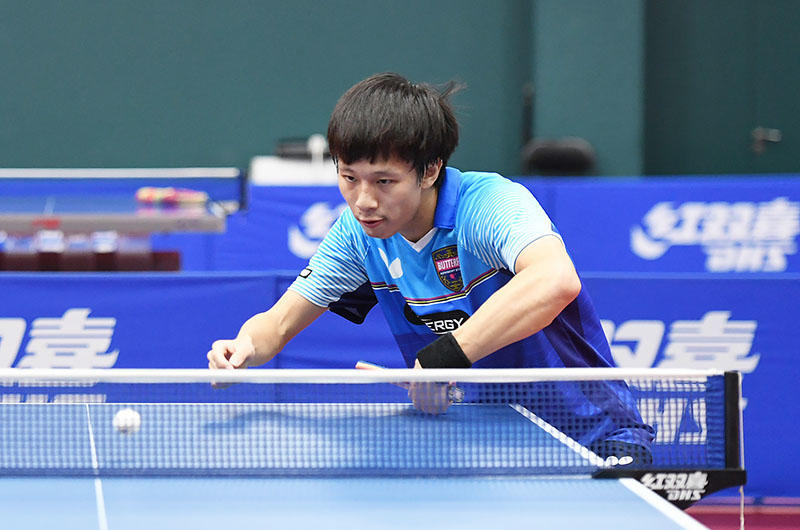 A Chinese up-and-coming southpaw Lin Gaoyuan,
who is climbing up the world ranking ladder with his highly stable counter
attacking plays close to the table.

This special programme will introduce Lin Gaoyuan’s techniques
with some successive pictures taken at the training camp
of the Chinese national team.

The fourth edition features his Chiquita.

Chiquita is a technique to return the ball on the table with a backhand topspin stroke
now many top players have acquired the stroke
as one of their basic techniques Lin Gaoyuan is no exception.
His effective Chiquita stroke is the opening gambit to release a fast attack.

We focus on his fast Chiquita stroke among his techniques.
Let us look at his stroke with regards to the playing pattern
executed in a diagonal direction
(to the backhand side of the right-handed opponent as he is left-handed).
It is played against the service received short to his forehand side
(service with side and back spin).

Point 1: Move wide to the forehand side and face the opponent in a diagonal direction.

The first action when receiving the service with the Chiquita stroke
close to the net on the forehand side is to move wide to the forehand
to stroke the ball in front of the body as shown in the photos A-1 to A-3.

The point to learn from Lin Gaoyuan is to face the body towards the diagonal direction (photo A-3).

Check also how he keeps a good balance by raising the free arm
(the right arm for the left-handed Lin Gaoyuan)
to the height similar to the racket.

Point 2: Make a backswing keeping a comfortable distance from the ball.

In this case when receiving with the Chiquita,
a player moves quickly to the forehand side to stroke in front of his body,
raising the elbow and making a backswing twisting the wrist to the maximum.
Pay attention to the distance between the body and the ball.

Lin Gaoyuan makes the backswing while keeping an adequate distance
away from the ball (photo B), this makes it possible for the racket to rotate
without being blocked by his body.

One of the reasons why a player cannot stroke powerfully in receiving
the Chiquita is the distance from the ball; the racket movement is restricted
if the distance is too close.
Pay attention not only to the movement sideways
but also the “balanced position” when executing the Chiquita
against the ball coming short to the forehand.
The preparation is the point to note, being an adequate
distance from the ball so that the racket movement is fully possible.

The fact to learn from Lin Gaoyuan’s backswing is that he keeps good balance
while leaning a little to his forehand side.
He bends his left knee on which he puts his weight.

Point 3: Move the racket in a straight direction being mindful of the downwards finish.

Lin Gaoyuan moves the racket sideways in a straight
direction releasing the twisted wrist in preparation after moving
to the forehand side and taking a backswing adequately
away from the ball (photos C-1 to C-3).

Thus, the speed of the ball can be increased by moving the racket sideways,
not upwards. Take note the movement that does not change the height of his elbow.

Take a close look at his follow through (the movement after stroke) (photo C-3).

Lin Gaoyuan follows through moving the racket downwards,
just like the backhand counter topspin close to the table
and the backhand topspin at mid-distance introduced in other editions;
thus, the advantages are that the ball will not go over the table
as the flight distance is restrained even when stroking powerfully.
The reaction to the next ball can be quick because the racket stays close to the body.

The common characteristic of Lin Gaoyuan’s backhand technique
is the finish of his stroke by pushing the racket downwards.
This is the finish to prevent errors hitting too long and to prioritise
the preparation for the next ball. It is one of the pillars that enables his effective
fast attacking play close to the table.